The importance of Australia’s variable and unpredictable climate is less obvious … while it may take only a few years to detect a change in a stable river system, the same magnitude of change may take decades to be reliably detected in a highly variable river system

Australia is well recognised as the world’s driest inhabited continent and this scarcity of water has ensured that water is both a precious and highly contested resource. Inevitably, water scarcity has also meant that natural systems relying on water have been substantially and negatively affected by reduced water availability as water has been extracted from rivers and groundwater systems in increasing volumes for consumptive use. In the case of our river systems, these impacts have stemmed also from changes to the patterns of wetting and drying, to flow regulation; many habitats receive less water or are flooded less frequently, some are flooded more often or even permanently, others are flooded at different times of year to that which was experienced prior to regulation.

While we can be confident that this suite of changes to flow in our rivers has had substantial impacts on aquatic ecosystems, our capacity to effectively mitigate negative ecological impacts is hampered by two important issues, which mean we don’t fully understand the degree and nature of these impacts or the specific drivers of change. The first issue is the absence of benchmark information on the condition of riverine ecosystems prior to regulation and other important environmental stressors, such as catchment disturbance and invasive species. The second is the inherent variability and unpredictability of flow in Australia’s inland river systems – the character summarised in the Dorothea Mackeller poem “My Country” in its reference to Australia as the land “…of droughts and flooding rains.”

Benchmark ecosystem information is critical for obvious reasons; it tells us what the system was like and how it worked under natural conditions, which helps guide rehabilitation targets (although we know that in most cases a ‘return’ to natural conditions in not possible, this knowledge can still help by guiding us to at least improved condition). Benchmark information can also, when combined with historical information on when anthropogenic stressors began, help identify the critical drivers of change (e.g., catchment erosion, water extraction or invasives such as carp) based on the timing of the onset of stressors compared to the timing of observed ecological changes.

It is easy to appreciate how a continuous record of ecosystem condition over 200 or more years might help us to better understand what that system was like, how it worked prior to substantial human impact, and what might have caused change. The importance of Australia’s variable and unpredictable climate is, however, less obvious. The answer lies in our capacity to reliably detect change in variable and unpredictable systems. Detecting change in more variable systems requires longer time series of data than is required in less variable systems—this is a simple statistical artefact. Thus, while it may take only a few years to detect a change in a stable river system, the same magnitude of change may take decades to be reliably detected in a highly variable river system.

According to Dr Michael Reid, a river scientist in the Department of Geography and Planning at UNE, addressing the issues of the scarcity of benchmark information and the time needed to detect change in variable systems requires extending our temporal perspective so that our record of ecosystem conditions extends over decades rather than a few years. Dr Reid notes that, although we do have some very good hydrological data in Australia, with river discharge records extending back for more than a century in some locations, systematic collection of other environmental and ecological data from Australia’s rivers is very scarce. Ecological data prior to the 1980s is rare, and even in this century systematic monitoring is confined to a few rivers, locations and years, while snapshot surveys, or no data at all, are the norm for most systems.

Despite this lack of data about past conditions collected via traditional survey methods, there are alternative ways to gain insight into past ecological conditions in our river systems and this has been a focus of Dr Reid’s research at UNE. The most widespread and well utilised approach is palaeoecological analysis of sediments accumulating in floodplain wetlands. Most lakes and wetlands accumulate sediments. These sediments are a mixture of mineral and organic material brought in from the catchment as well as organic material generated by biological processes within the wetland. Much of the organic material that is deposited in the sediments is broken down by in-situ biogeochemical processes, but a significant portion is preserved, and these biological remains, along with the chemical and physical character of those sediments provide a record of the ecological community and conditions within the wetland and its catchment at the time of deposition. Among the important indicators preserved in these sediments are pollen from catchment and local vegetation, diatom frustules from the diatoms living within the wetlands, zooplankton exoskeletons and eggs, plant seeds and pigments, fish bones and even DNA.

Dr Reid has examined sediment records from billabongs on floodplains of several of the major rivers of the Murray-Darling Basin, including the Murray, Murrumbidgee, Goulburn, Lower Balonne and Macintyre Rivers (Davidson et al. 2013, Gell & Reid 2014, Reid et al. 2002, 2007, 2017, 2018). These records have provided valuable insights into the condition and dynamics of these important riverine habitats over hundreds and even thousands of years. According to Dr Reid, among the important lessons learned from these records is that the billabongs appear to have been severely impacted even before European colonisers began extracting water and regulating flows. These impacts include loss of submerged plants due to catchment soil erosion and the resultant increased turbidity from the influx of fine sediment, nutrient enrichment and increased salinity. Thus, while we can be confident that the condition of degraded riverine ecosystems can be improved by the delivery of environmental water guided by the best possible science, improvements are likely to be limited if those other drivers of change, notably elevated fluxes of sediment and nutrients derived from catchment erosion, are not also addressed. 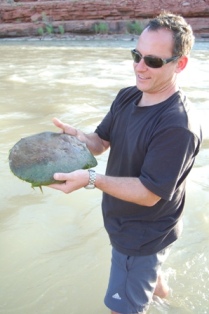